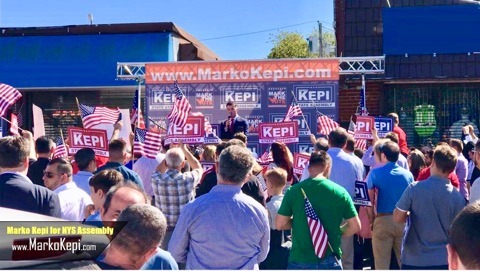 Marko Kepi, a US Marine, announced his candidacy for New York State Assembly yesterday at 1169 Hylan Blvd in front of a roaring crowd of more than 500 supporters.

The crowd was made up of family, friends, local business owners, and civic leaders. The 64th Assembly District will be vacated by Assemblywoman Nicole Malliotakis and is located on the East Shore of Staten Island and Bay Ridge Brooklyn. Kepi delivered a strong, enthusiastic speech over the chants of “USA” and “Kepi, Kepi, Kepi.”

“Albany is a mess and for far too long liberals and the elite have ignored the needs of the working-class people… I promise to work tirelessly and answer to no one but the people,” Kepi said at the rally. Former Congressman, Michael Grimm, attended the rally and will be serving as Kepi’s official Campaign Chair. “I’m proudly supporting Marko Kepi for two reasons: I know as a Marine he will serve us effectively and relentlessly, and because Marko will bring real leadership that we desperately need to fight Mayor DeBlasio and the Albany elites who have abandoned us,” said Congressman Grimm. 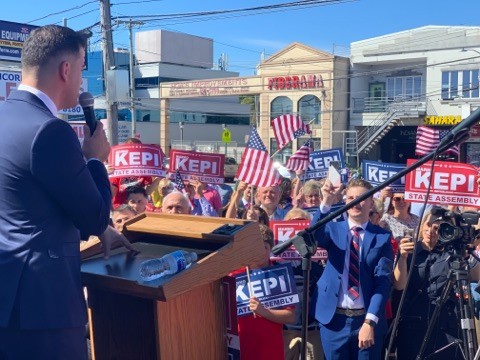 Also, in attendance was Former Congressman Joseph DiGuardi, who be serving as the Campaign Treasurer. The Congressman stated “I know Marko Kepi for many years and have seen how hard working, intelligent and capable a young man he is; there is no one better to serve the people of Staten Island and Brooklyn than Marko.”

Kepi, a Republican, and United States Marine, resides in Grant City. He graduated from John Jay College of Criminal Justice and earned his Executive Master of Business Administration (MBA) from Wagner College. Kepi worked for Senator Marty Golden in Brooklyn, where he helped constituents resolve quality of life issues. If elected, Kepi will be the first ever Albanian American elected to office from Staten Island and Brooklyn.